Discovering the secret of good swimming

Discovering the secret of good swimming 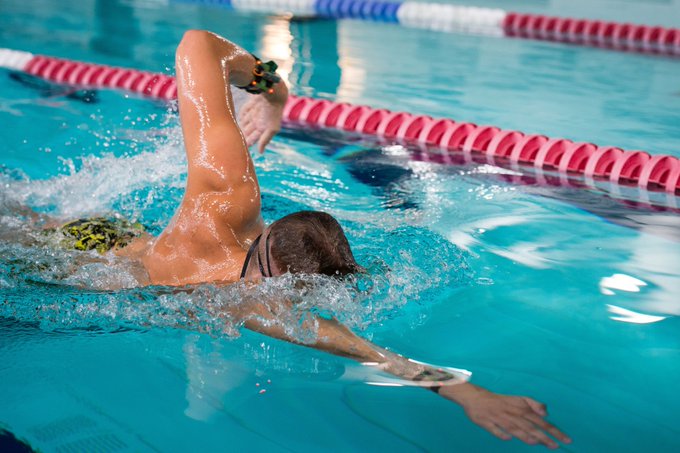 How fast you swim depends on a hundred and one factors, Sander Schreven, embedded scientist and PhD student at InnoSportLab de Tongelreep, says. How tall you are, how much you weigh, whether you are mentally fit, have you trained well, time of day, but also your swimming technique. For example, how you push your hand back during the breast crawl, how deep that hand is, whether the hand is twisted or straight back, whether your hand moves outwards or inwards.

That technique is difficult to see. You can film it, but that is two-dimensional and you cannot see whether the hand is slightly tilted or not. Filming in 3D can show that, but it often takes a lot of time and it takes a long time before the results are processed in a graph. Sander developed software to reduce the processing time to two hours.

Roald van der Vliet, director of ISLT, is delighted that Sander, who started out as an intern at the Lab ten years ago and then went on to do his PhD, has now come up with this science: "What is happening here is a big step. This is the first time we will be able to discover the secret of good swimming."

Previously, Sander developed software that analysed and fine-tuned Ranomi Kromowidjojo's start in detail. "That started off as a bit of a 'shoestring-operation' but it became more and more professional." Today, the ISLT carries out many analyses such as starts and times to improve the performance of swimmers.

In order to obtain this data, it is important that the cameras remain in a fixed position, Sander says. That is why the Lab invested in that double floor in the swimming pool. "That way we don't have to do that calibration process over and over again."

What is new is that the information from the cameras can now be processed more quickly. Whereas it used to take two weeks, it has now been reduced to two hours. Student Sjoerd Vennema still had to check the images. He did so by constantly checking the markers. "It made my eyes square," Sjoerd syas. As an assignment for his internship period, he eventually described points of improvement for the 3D-analysis. "You can't keep clicking and staring at a screen for long. You have to be able to do that faster and differently."

The data produced graphs showing how a hand moves through the water. A stroke of one of the top swimmers was carefully analysed and discussed with trainers Marcel Wouda and Patrick Pearson.

Sander: "It took them a while to figure out how to read the graph." What the graph shows is where a swimmer can make gains. "For example, if he comes out very deep with his hand. Then he's already done delivering propulsion there, but it also took quite a long time for his hand to come out of the water. Those are two-tenths of a second in which nothing actually happens. This way you can see if you can fine tune his technique, so that he increases his stroke frequency or shortens the duration of his stroke. Without affecting the speed at which he swims. So if you maintain the propulsion and manage to get the rest out of it, you can achieve a higher frequency. With which you transfer more net power to the water. And that actually turned out to be quite new, and those are nice things."

"As trainers, we are trained with manuals that have seen minimal adjustments to swimming technique," swim coach Patrick Pearson says, "We know very little about how humans move in the water. It's funny, because the swim stroke is the biggest part of the race."

For Pearson, 3D swimming analysis is the future. "Eventually, the idea is that we will look at the individual differences for all swimmers. That we can say 'that stroke should go out a little earlier or a little less' to make a swimmer faster. Using statistics to say what works best for someone."

The system is not there yet. What you want most is to be able to give feedback as quickly as possible, Pearson continues. He has above all seen that it works, "you see exactly the pattern of the stroke and the timing".

A swimmer has been followed in recent months. In addition to individual feedback, 3D swimming analysis can provide general swimming tips. For that, much more data is needed. And that requires time, manpower and the willingness of swimmers to test. Swimming is very technical. Top athletes generally master this technique better than amateur athletes, Pearson states. "Of course, more factors play a role, but mastering that technique well is what often makes them so fast."

"When you have to take measurements in top athletes, you have to keep the balance with the short-term goal. At the moment, that are the Olympic Games. We are working towards that. Then you can't do a 3D measurement every day." So the big data collection is still some time away.

It is also too early for individual feedback. Pearson: "For this cycle to the Olympics, we will not benefit from this innovation yet. But for the cycle after that we certainly will."

This innovation also attracts Pearson because it may allow him, as a trainer, to give very different tips and apply new developments. "And if it leads to performance improvement in the short term, it increases the swimmer's enjoyment of swimming." Perhaps the results of that 3D swimming analysis will eventually lead to new manuals for trainers.